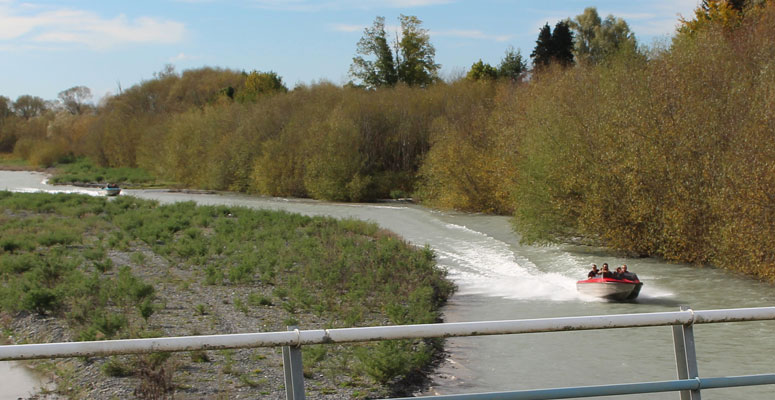 It could be done, that is the message I want to convey

So what’s going on in the North Ashburton, where has all this water suddenly come from? Since about mid-March the RDR has been spilling water from its canal up behind Methven, supplementing the flow in the North Ashburton River with surplus water as the Highbank power station undergoes maintenance.

It couldn’t have come at a better time for the river with the river mouth being closed for some months over the hot dry summer. And how quickly the environment has responded, the increased flow has opened the river mouth, allowing for the immediate interaction between those species that move between sea and river.

And it’s been in the nick of time for the Ashburton salmon run allowing them to enter the river to run up to spawn. For the North Ashburton River it’s the salvation it badly needed, reconnecting the permanent flow in the upper river with the river mouth.

And the salmon didn’t need a second invitation!

In the crystal clear mountain water of the upper river in the pool against the RDR’s siphon, two large fish show that the salmon have taken full advantage of the opportunity to run the river, Mother Nature doesn’t mess about, it would seem!

A pat on the back for the RDR would seem appropriate, while it may not have been their intention they have shown what can be achieved in a very short period of time.

There is a ‘but’ though. For years now the Canterbury Water Management Strategy has been doing their thing, in my opinion popping a few ‘band aids’ on the environment in the odd place, pretending to be providing the so called win win collaborative approach to water management, while quietly ignoring questions about the bigger issues, and certainly not coming up with any substantial environmental solutions.

We have the North Ashburton River where normal summer flows at Digby’s Bridge are non-existent, just a dry barren expanse of river bed largely robbed of it flow by over a century of agricultural development, development that we all welcome as it has made the region the prosperous region we see today, but it has had an environment cost.

And yet the solution looms so large and obvious before us; either supplement the flow from the RDR directly, the infrastructure is largely already there as the RDR themselves have demonstrated, so this could happen immediately! Or a better solution might be a combination of first supplementing the stock water races that rob a good percentage of the rivers natural flow, allowing that natural flow to stay in the river in the first instance, and then supplementing the rest directly to maintain an environment flow as needed.

But where will the water come from - that water is already allocated? We don’t have enough as it is? Well true and not so true, as we also know that there have been great strides in the efficiency of irrigation systems, efficiency means doing more with less. Less water is now needed to irrigate the same amount of land as a decade ago. As efficiency grows it means water can be redistributed, either expanding irrigated areas on individual farms or re allocated to other users. Or it could be put aside for environmental initiatives! It is a case of priorities!

It’s a choice we could choose to make if we just got our heads around the value of looking after our environment! In a true win win approach to water management, benefits should flow each way, but to date that is largely not happening, yet there are very real benefits to be had from giving back to the environment, shoring up our agricultural exports against the growing perception that NZ isn’t as green as it should be for one. Markets would be reassured if they saw positive improvements in our environmental stewardship as opposed to our current position where the signals are largely the opposite. Surely this is a concern to all in agriculture, not to mention our now rather shaky Clean Green Image that our tourism industry depends upon so heavily

And this water would not necessarily be lost to agriculture, for instance if the Nth Ashburton did have a permanently augmented flow, a certain percentage would leak back into the ground water system and be available to be further used. Likewise once the flow reached the Sth Branch it would enhance flows there and in theory could be re allocated to users in the lower plains.

Environmental groups would be less likely to stand in the way of further developments if they knew these sorts of environment benefits were the likely outcomes, in fact they might even actively encourage such development if there was to be an environmental payoff. I know I for one would

There’s also the dilution effect that alpine water will have, a tool to dilute nitrate levels.

And the Hinds River - Another opportunity missed

In the CWMS Hinds Zip there’s a clause to investigate direct flow augmentation to the Hinds River.

This little river used to be a thriving small stream fishery, unfortunately that fishery has died as nitrate levels in the river and feeder nursery streams has increased as a result of agriculture intensification to the state we find it in today where the nitrate levels are now toxic to fish.

In March 2012 a 4 day trial augmentation occurred when water was put into the Hinds from the RDR. The trial’s report recommended additional testing over a longer period…

3 years and no action later, and we have the RDR spilling unused water and this second trial is still not happening – so the question is - just what are the Zone Committee waiting for??

For some unknown reason the target for reducing Nitrate in the Hinds is 2035 yet it is physically possible to do it in about 24 hours, the time it takes water to flow down the river from the RDR, the infrastructure used for the trial could allow that to happen tomorrow. So why aren’t the Zone Committee doing it!!

The benefits to the Hinds River are obvious, adding clean Alpine water would immediately provide flow and dilute the nitrate levels in the river, allowing an environmental recovery to start, so why hasn’t this trial been completed long ago, and why aren’t we now actually seeing the river recovering?? How long is it reasonable to wait, why do they sit on their hands?

To answer my own question it is no doubt all about money, as it always has been, supplementing river flows with water that could otherwise be used for irrigation is somewhere that the Zone Committee dominated by farming interests doesn’t want to go – if they did one, they might have to do them all – and we couldn’t have that could we?

Of course there are many nuts and bolts that would need to be put in place to make the above scenarios happen, Iwi have their concerns and need to be consulted, water will need to be made available, infrastructure modified, but it could be done that is the message I want to convey, it’s time that these environmental issues were addressed positively and quickly, because it’s not alright for one sector of our community to cause a river to run dry in the pursuit of personal profit, likewise it’s not OK to poison another and then not work tirelessly to find a solution.

And then when solutions are presented to ignore them and come up with bland excuses to brush those concerns off, causing a never ending circle of delays. It’s not good enough in any way or form and we the wider community need to demand better of them, it’s time the agricultural community took responsibility for the problems that agriculture has caused and give something back to the environment. Is it really asking too much?