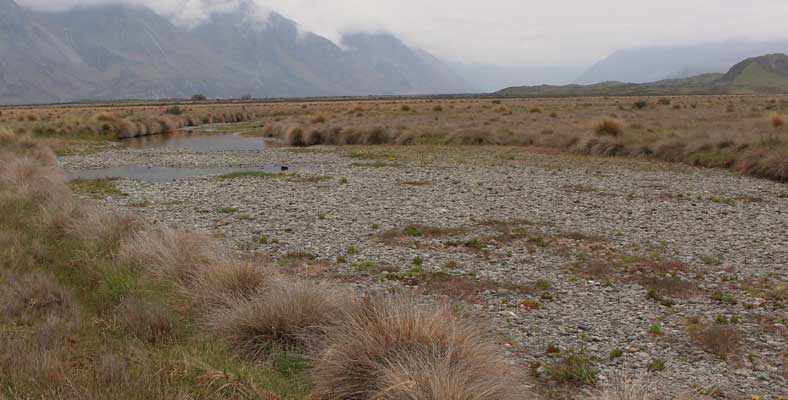 Mr Gerard, a Central South Island Fish & Game Councillor, has resigned in total frustration with the attitude of some of the Council and staff that ultimately has allowed this stream to reach this state by not allowing it to be fixed properly. Further Mr Gerard says the fate of this stream is systematic of a deep malaise that exists within the CSI F&G office.

This superb world class trout fishery and salmon spawning stream, has been diverted down a narrow side stream that offers little in fisheries value by an illegal diversion, leaving a section of the main stream dry. This stream, that was once a premium destination for both local anglers and guided fishing parties, is now a shadow of its former self.

'When I put a motion to restore Deep Creek to the Council it was met with concerted effort to undermine any progress through a tirade of misinformation, the chairman stating it wasn't even an illegal diversion, the manager saying natural processes had shaped it. A document presented had been deliberately altered to show that gaining consent to do the work was unlikely... '

Their response is in stark contrast to other recent cases were the persons responsible for similar unauthorised works in streams have been prosecuted and fined many thousands of $$, what is even more concerning is that this stream is protected by a conservation order and CSI F&G have turned a blind eye not only to the initial intervention, but also by standing in the way of a proper repair!

An email shows that CSI F&G told Ecan they didn’t ‘want to go down an enforcement line’, and Ecan say they are unlikely to allow a consent for the repair without F&G’s agreement.

This issue has been put to CSI F&G on at least 5 occasions. Expert angler opinion supports the stream being fixed, and an engineer’s opinion shows that it can be repaired. CSI has underestimated the value of this stream to the angling community, and has failed to protect the angler investment in the conservation order and to carry out their statutory responsibilities to manage and maintain our fisheries –

'When written questions were asked of the manager and chairman regarding this and other concerns, they refused to answer. Apparent conflicts of interest are ignored, standard meeting procedures aren't followed. The governance policy hasn't been updated since it was introduced in 2000!! They aren't meeting their obligation to protect our fisheries, there is no leadership, no annual agenda; the council just drifts from one meeting to the next...'

Mr Gerard says ‘I wasn’t allowed to achieve even simple requests like having the meeting minutes, agendas or the councillor interests published on the website, or to have a replacement councillor appointed to replace one who had resigned. This is very concerning because the CSI Chairman has extensive irrigation interests and the Council should be very open and transparent on these matters to protect the integrity of itself and also the wider F&G organisation. And it was certainly fair and reasonable that the next highest polling candidate should fill that vacancy’

'The level of bias and lack of natural justice meant it was pointless staying on as a Councillor' he said. 'Government entities should be above reproach. I've written to the Auditor General's Office and asked them to look into the numerous concerns I have...'